Thursday night, MTV ran a program called "True Life." The episode for Thursday night was called, "I'm a gun owner." They interviewed 4 people. A gang banger who packs a weapon illegally, a hunter, a victim of crime who now has a permit to carry concealed, and a former gang member who's disabled, and no longer packs a gun, and in fact preaches against guns.

What I don't get is how do they pretend to represent "true life" when you use FOUR subjects, two of whom are or were convicted felons to represent gun owners in America?

When someone mentions "gun owners" to me, I think of the typical law-abiding citizen. In my opinion, anyone who uses a firearm for illegal purposes, such as rape, robbery or homicide, is not a "gun owner." They are a criminal!

Now, I do make an exception for those citizens who live in states with draconian gun laws, who feel a need to protect themselves, but otherwise go about legitimate business. If you live in a place like NYC for instance, it's darn near impossible to get a permit for protection. Unless you're like the Mayor's cousin or something.

But if you're like the scumbag gang-banger, in my opinion, you're not a gun-owner. You're a criminal and should be locked up. Preferably in Siberia.
Posted by Big Gay Al at 03:11 1 comment:

The gift that keeps on giving part deux

Below is my leg. This is over a month after I've come back from New Orleans. Don't get me wrong, I think NO is probably a very fun place, under different circumstances. But pay attention here. If you take a security job for down there, you are taking your life and health into your own hands. I would recommend that if you are diabetic like I am, stay away. 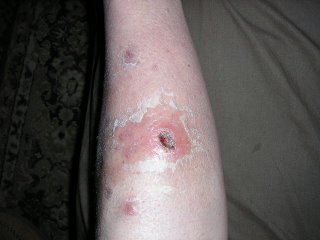 The gift that keeps on giving

Well, here it is, more than a month since I left New Orleans, and my right leg is STILL infected. Only now, they tell me I have MRSA. It's some sort of super infection that is immune to most anti-biotics.

What's keeping this bill from the Governor's desk?

It went to the Michigan Senate Judiciary Committee on August 31, 2005, and that is where it has sat ever since.

I have been told by an anonymous source that a certain state Senator is "sitting" on this bill as it was put forth via the efforts of SAFR (Shooters Alliance for Firearm Rights) and GLSSA (Great Lakes Shooting Sports Assoc.), and apparently not with any help from MCRGO (Michigan Coalition for Responsible Gun Owners), a once great, grass roots Pro-2nd amendment organization that has fallen on hard times.

It's either that, or he doesn't like Rep. Rick Jones. But I find that difficult to believe.

And while we're at it, what about HB4642? This bill would allow people to transport other individuals' licensed and inspected pistols. Like say, your wife, or husband.

Well, what about it Sen. Cropsey, are you going to get off these bills and have a vote on them, or what?

A TEXAN patrol officer who became the first foreigner to join the British police is to resign after three years because he says policing is too dangerous here compared with America.

Ben Johnson, a 6ft 4in former paratrooper nicknamed Slim, has written to his chief constable asking to carry a Glock 17 handgun on his routine beat in Reading.

He said officers are dying unnecessarily because they are less well equipped and trained to protect themselves and the public than their American counterparts.

“The risks required to be taken by unarmed and poorly trained British police are too great for me to continue being a police officer and I will be resigning my commission in a few weeks,” said Johnson.

“I am tired of my colleagues dying when, if they were better trained and equipped, they would have a fighting chance of survival.”

Johnson’s decision was prompted by the murder of PC Sharon Beshenivsky, a mother of three children and two step-children, who was shot during a robbery in Bradford last month. He said her death demonstrated the lack of training and equipment given to British police.

“Beshenivsky did the one thing that officers in America are trained not to do. She walked up to the front entrance of a business during an alarm call. If the incident had happened in America, she would never have done that. She would almost certainly have been alive today.”

Last week Johnson wrote to Sara Thornton, acting chief constable of Thames Valley police, asking to be armed on patrol. “If the chief authorises me to carry a pistol, then I will not be resigning,” he said. “But that is an impossibility. I now have the choice of continuing in a dangerous job, ill-trained and ill-equipped, or leaving the profession I have loved.”

Johnson, 34, served as a paratrooper in the American army before joining the police department in Garland, a Dallas suburb. Like other officers he carried a Glock 22 pistol as a sidearm, supported by a 12-bore shotgun and an AR15 semi-automatic rifle in his patrol car. In America he routinely confronted armed criminals and received 10 commendations for his bravery.

He came to Britain three years ago to live with his fiancée Louise, an IT consultant. He was able to join the Thames Valley force because of a change in regulations that lifted the bar on foreigners.

The couple are now married and Johnson has taken a short career break to look after their 18-month-old daughter Catherine. He said fatherhood had changed his perspective. “It would not be fair [to my family] to continue in a job that is being made more dangerous by a refusal to modernise,” he said.

It was an incident earlier this year that first caused Johnson to consider handing in his warrant card. He was on plainclothes CID duty when he was called to the Royal Berkshire hospital in Reading to interview a victim of domestic violence.

A woman had jumped out of a first-floor window to escape her violent boyfriend, paralysing her from the waist down. The boyfriend, a member of a drug gang, was already wanted by the police for attempted murder, after shooting someone in the back of the head in London.

Johnson and other plainclothes officers who went to the hospital were alerted that the boyfriend had telephoned to say he was coming to see her. They also received a warning that he might be armed.

According to Johnson, he wanted to arrest the man when he arrived, but was ordered by a senior officer not to do so because of the risk. The suspect escaped and it was two days before he was arrested.

“That was the first time I’d ever let someone wanted for attempted murder simply walk away from me,” said Johnson. “It went against everything I knew. I thought it was my duty to arrest these people.
“It seems that in Britain ordinary officers are instructed not to engage with dangerous criminals. But if police officers can’t engage with them, who can?” He is critical of Charles Clarke, the home secretary, who says he can see “no evidence” that arming officers would reduce the number of police fatalities. “With all respect to the home secretary, he has never answered a 999 call,” said Johnson.

Of Beshenivsky’s murder, he said: “I have been in exactly those situations on patrol in America and I have managed to arrest and disarm offenders without being harmed.”

In America, officers spend weeks learning how to cope with armed incidents. But in Britain, Johnson said, he was never shown how to handle or unload a firearm or told how to respond to an armed robbery. “Officers spend more time learning about how to process paperwork than dealing with violent situations. We are trained more like social workers than police officers.

“The training I received in Britain in dealing with armed incidents was virtually non-existent. It consisted of a 30-minute lecture from a firearms officer who said: ‘If you see the business end of a gun or anyone holding a gun . . . turn, run and get away as quickly as possible’.”

This apparent complacency was reinforced at his swearing-in ceremony when a senior Thames Valley officer told him and colleagues that they would not face the sort of dangerous incidents portrayed on The Bill, the television programme.

“I was surprised that he said we wouldn’t come into harm’s way. This went against everything I had learnt during my career,” said Johnson.

By contrast, the chief officer of Garland police department tells new recruits that it is his task to ensure they are prepared and equipped to face any threat.

Johnson accepted that America is more violent than Britain, with a gun culture contributing to a murder rate 17 times higher than here. He recognised, too, that many more police officers are murdered in America — 57 last year compared with just one here — proportionately about 11 times as many.

But he maintained that British police are far more exposed to danger when confronted with armed offenders than their US counterparts. He said he did not want all police armed — just the “first responders”, officers who, like Beshenivsky, are first on the scene of crimes. He believed this would mean arming about half of Britain’s 140,000 police.

A spokesman for Thames Valley police said: “PC Johnson is currently on a career break. These are his personal views and he did not discuss them with anyone before going to the press.”
Posted by Big Gay Al at 16:10 No comments:

Big Gay Al
I am a large, White male. I generally describe my politics as liberally conservative. Depending on who's "test" I take, I either come out as fiscally conservative, and socially liberal, or a Libertarian. In any event, I believe in the right to keep and bear arms, and the right of self defense, REGARDLESS of where you are.